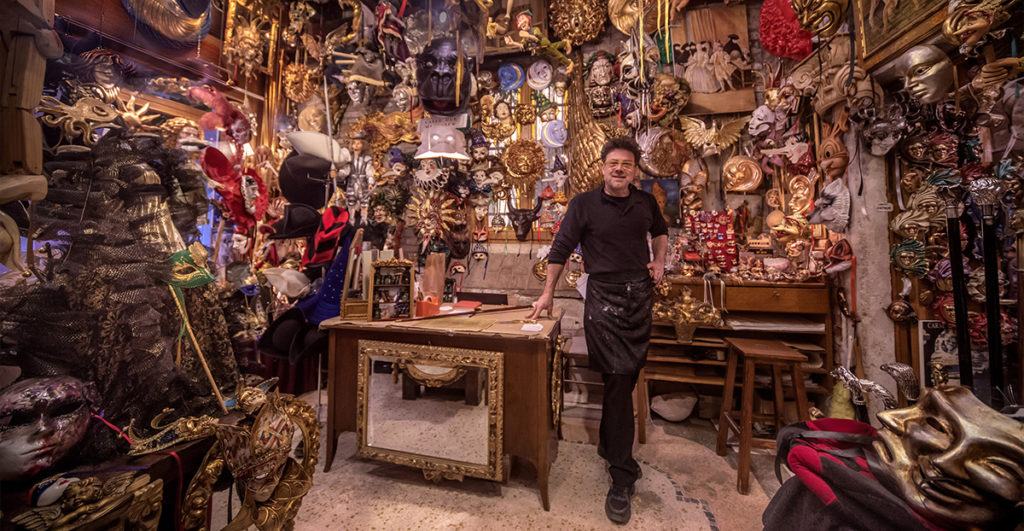 Gualtiero Dall’Osto, born in Thiene (Vicenza) began his artistic study at the Accademia di Belle Arti of Venice.
He attended courses of sculpture, modelling, theatre and took part in stages of History and Technology of the Mask.
From the ’70 onwards, he was one of the protagonists of the recovery and throwning of venetian Carnival.
– In May 1985 he was asked to exhibit his works in Francoforte for the first edition of “Italian Craftsmanship Exhibition”.
– In 1986 he created the masks for the lyrical opera “Un Ballo in Maschera” by G. Verdi directed by Gustav Kuhn and produced by Pietro Zuffi.
– In 1987 he opened the Olympic Games in Rome within the opening show “Il Colore dell’Italia” produced by Luigi Squarzina, performing the different italian regions with their traditions and cultural peculiarities.
– In 1991 he presented his artworks in Chicago, at the Galleria Marchetti with the exhibition “Italia in America”.

– In 1992 he was asked to exhibit his masks to “Mitsukoshi” the biggest Department Store in Tokyo, Japan.
– In 1994 with the Venice CNA Craftsmen Council he was among the organizers of the “Mercatondo” on the idea of 18th century Arts and Crafts Markets.
– In 1996 he presented his masks in Austria, at Bruck/Mur, in the Bundeshandelsakadamie with the exhibition: “Maschere del Carnevale Veneziano”.
– Since 1996, he teaches every year Sculpture and Clay Modelling at the Professional Improvement Courses organized by the Veneto Region.
– In May 1997 he was in Berlin for the Festival “La Dolce Vita”, together with the singers Milva and Andrea Bocelli, with his masks in the performance called “Banda Variabile di Invenzione Musicale”.
– In July 1997 he was called by the fashion-stylist Gai Mattiolo for “Divina Roma” a fashion event in Rome, Piazza del Campidoglio, to use his masks to dress the models up.
– In 1999 he created and directed the Event “Carnevalentino” at Palazzo Pisani Moretta during the Carnival in Venice.
– In 1999 he was asked to attend to the Italian Craftsmen Exhibition “Italian Square” by Milan Sister Cities Committee at the Cultural Center of Chicago in the U.S.A. where he organized as well some theoretic lessons of how to make the traditional paper-machè venetian masks.

– In 2000 he created and organized the Event “Mascheranda” at Palazzo Pisani Moretta and from then on every last Sundays of Carnival with the participation of international artists and VIP guests.
– Since 2000, twice a year he teaches in Spain at “O’Pelouro Axeito” an experimental School of Psychopedagogical Innnovation and Integration founded by Juan J.R. De Llauder Riesco and Maria Teresa Ubeira Santoro.
– In 2002 he organized the exhibition “Costumi carnevaleschi e della Commedia dell’Arte” at Palazzo Podestà in Rovereto showing the wide choice of his historical faithful reproductions of handmade Costumes.
– In 2002 he also attended to the event “Rovereto Venexiana” with his workshop “La Maschera e lo Specchio” performig the ancient venetian Art of Mask making.
– In February 2003 the british network BBC asked his Costumes for the BBC programme “Jet Set”.
– He also organized the fashion parade with his Costumes and accessories called “Our Dream in Venice” at Ca’ Zanardi introduced by a lecture regarding the historical and traditional venetian Costumes.

– In May 2003 he created the Masks for the movie from the lyrical fairy -tale “Pierino and the Wolf” by Sergej Prokofiev for Associazione Artistico Culturale “Federico II” in Padua, in co-operation with the Venetian Collegium Symphonium.
– In July 2003 for the historical commemoration “Rovereto Venexiana” he realized the Costumes Exhibition “L’Abito fa la Storia” – venetian female fashion from the year 1000 to the 18th century – inside Palazzo del Podestà in Rovereto from the 18th of July to the 3rd of August – an historical journey of scenes , costumes and accessories. Into the same commemoration he proposed a Masks and Marionettes Workshop with an exhibition of his productions in Rovereto at the Sala Baldessari.
– For the 2004 edition of the commemoration “Rovereto Venexiana” he created the scenographies for the setting “Piazza de le Maravege” with Costumes and Masks in Malfatti Square.
– In December 2004 he was called at the Hakone Glass Forrest Museum in Hakone, Japan where he created and set the Venetian mask-maker workshop working there on the traditional Venetian mask decorations. His Atelier Costumes had been worn there by the Museum visitors in the photo sets he created.

– His Atelier worked on the restoration of some ancient Costumes exhibited in winter 2006 at the Querini Stampalia Library for a Rubelli fabric creators celebration.
– The German Network Tele 5 choose Tragicomica Atelier during Venice International Movie Festival 2006 to introduce Venetian costumes craftsmanship. The presenter Mrs. Miriam Pielhau wore a Tragicomica 18th century Costume for her interviews on the Cinema TV show.
– In September 2006 the journalist and writer Mr. Tony Laszlo and the famous Japanese comic-strips writer Mrs. Saori Oguri choose Tragicomica Mask workshop for their comic-strip guide book of Venice.
Polyvalent artist, he has realized masks and scenographies ordered by Lyrical Organizations and Theatrical Companies like the Arena in Verona, Teatro Regio in Torino, San Carlo in Napoli, Sistina in Roma, the Fenice and Goldoni Theatre in Venezia and for the coreographer Bejart.